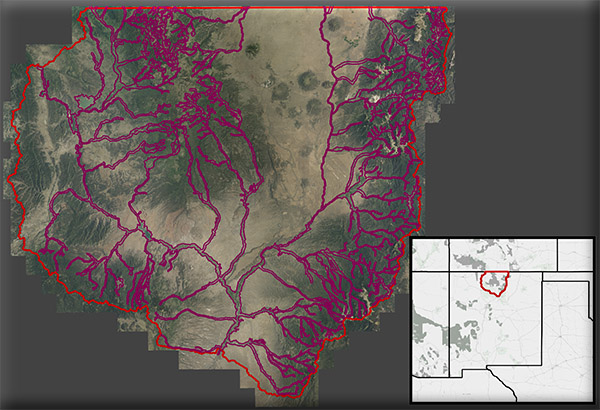 We will develop a riparian and wetland map for New Mexico. We will generate image objects (polygons) from recent air photos and other data for priority areas within the Upper Rio Grande Lowlands. We will classify image objects into classes using variables attached to the objects. Variables will be generated from imagery and from abiotic data such as soils, slope, and land position. A number of classifications will be performed to determine the maximum number of classes that can be classified with acceptable accuracy.

Although riparian and wetland habitats are vitally important to New Mexico’s fish and wildlife, they are among the rarest habitats in the state. Despite their small area, most of New Mexico’s vertebrate species depend on riparian areas for food, water, cover, and/or migration routes. These habitats are also among the most threatened, as they are fairly sensitive to disturbance and change.

The invasion of noxious weeds along New Mexico’s waterways, especially salt cedar (also known as tamarisk (Tamarix spp.), further diminishes the quality and quantity of riparian and wetland habitats in the state. The tamarisk leaf beetle (Diorhabda spp.) was introduced into the southwestern United States as a biocontrol for salt cedar. Although the beetle is expected to reduce salt cedar populations and improve riparian and aquatic habitat over time, it can also destroy large areas of existing habitat. The beetle has altered habitat used by the Endangered southwestern willow flycatcher (Empidonax traillii extimus) and the Threatened yellow-billed cuckoo (Coccyzus americanus).

The riparian and wetland habitat map will delineate the composition, cover, and structure of riparian and wetland vegetation at a fine scale across New Mexico, including the location and extent of invasive species such as salt cedar. The map will provide a baseline for tracking tamarisk leaf beetle impacts and their severity, indicate where restoration if urgently needed to prevent habitat loss, and support fish and wildlife surveys and monitoring. The map will also include ecological descriptions to support wildlife management and restoration across the full range of riparian and wetland habitat conditions in the state.