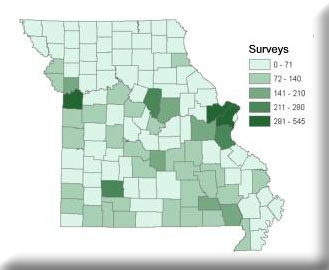 The Missouri Department of Transportation (MoDOT), State Historical Preservation Office, Department of Natural Resources (SHPO-DNR), Mark Twain National Forest, U.S. Army Corp of Engineers and MoRAP, worked together to create a geodatabase representing known areas of historic significance in the state of Missouri. This project is the first of its kind in the state; therefore the early phases were focused on methodology development. Initially MoRAP upgraded and appended the SHPO Access database and used this format for capturing archaeology survey attributes. Surveys are areas that have been surveyed for archaelogical sites, generally in locations where human infrastructure development is slated to occur. Sites are identified locations of historical or cultural significance. ArcMap was used to create two shapefiles, one of surveys and one of sites, taken from photocopies of 1:24,000 topo quads with hand-drawn survey and site polygons. We then decided to capture survey and site data using a web based form and a SQL relational database server. This way digitizing of polygons and attributing of data occurred nearly simultaneously, and the product was portable and supports multiple users. The end goal was to have digital layers of archaeology sites and surveys statewide, including attributes of the hard copy survey reports and site forms. Surveys and sites were attributed with fields determined by MoDOT and SHPO.

In September 2007, MoRAP finished the digitization and attribution of the designated survey and site records stored at SHPO. MoRAP and partner organizations captured over 21,800 survey polygons representing 9,400+ survey records and over 23,000 site polygons including 20,500+ fully attributed sites.