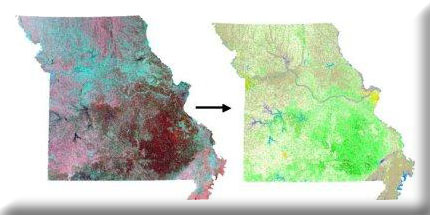 The current Missouri landcover classification project is a continuation of the project that used circa 1990 TM satellite data to complete a classification that is in wide use in Missouri. For the up-date, we used satellite triplicates (ETM+) collected during the growing season (spring, summer, and fall). We improved the urban classification by using an urban mask and classifying urban and non-urban areas separately. Basic techniques consisted of unsupervised classification and cluster busting to resolve ‘confused’ spectral classes. We have also used hydrography, NWI wetlands information, and NRCS WRP lands to improve recognition of bottomland and wetland vegetation types. As of January 2005, a draft classification of the state was completed. The state classification was then visually compared to 2003 county based DOQQ mosaics. Areas found to be in error were manually updated. As of May 2005, approximately one-half of the state has been updated in this manner.
The Missouri landcover project was finished in December 2005 and delivered to MSDIS for dissemination.