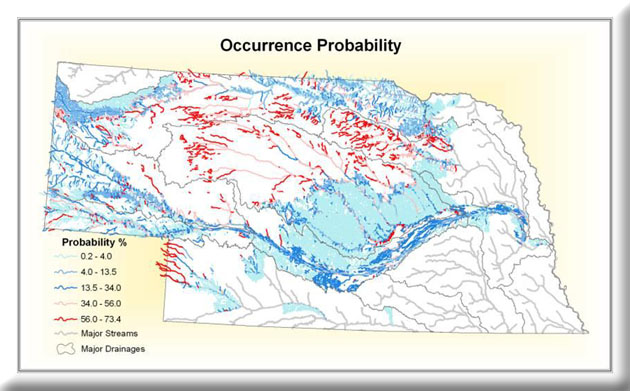 To construct the predictive fish distribution models, we first compiled 6,623 fish community collection records, which were obtained from field samples made by a variety of scientists between the years of 1857 and 2001. The collection records were then placed into a single relational database. Using ArcGIS, each collection in the database was then geographically linked, segment-by-segment to a modified version of the 1:100,000 National Hydrography Dataset (NHD) and the 1:100,000 USGS/NRCS 11-digit Hydrologic Unit (HU) coverage for Nebraska. Digital range maps, based on the 11-digit HUs, were constructed for each species, professionally reviewed, and revised as necessary. A total of 23 local and watershed attributes were quantified and attached to each of the 62,941 stream segments within the 1:100,000 modified NHD. These 23 attributes were used as the predictor variables for modeling the distribution of each fish species. Species distributions were modeled using Classification Tree analyses, which is a nonlinear/nonparametric modeling technique. The input dataset for each species consisted of all 6,623 collection records, which contained a binary response variable indicating the species presence or absence in each sample and the associated values for each of the 23 independent predictor variables.
Project completed July 2006.