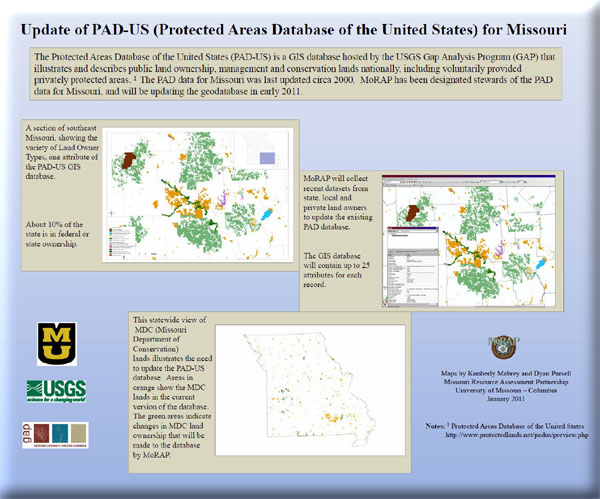 Missouri is intermediate among states in terms of public lands ownership, and about 10% of the state is in federal or state ownership.  These lands offer the promise of significant contributions toward conservation of communities and species within the state.  The Gap Analysis Program (GAP) has been instrumental in helping states identify species and communities not adequately represented in the existing network of protected or managed lands.  The data on landcover, species distributions, land stewardship (management), and conservation status have provided land managers, planners, scientists, and policy makers in Missouri with the information they need to make better-informed decisions.  Unfortunately, the currently available public lands database for the state is out of date.  The last up-date occurred in circa 2000, using data that was even older.  Significant changes in public lands ownership have occurred since that date.  Furthermore, data on ownerships are not found in an easily accessible publicly accessible format.  This project will update information on public lands ownership and thereby contribute to the overall PAD-US.
Non-federal lands information was up-dated, and staff also provided input that resulted in significant improvements to the overall data gathering and data management process that will be applied by others in the future.